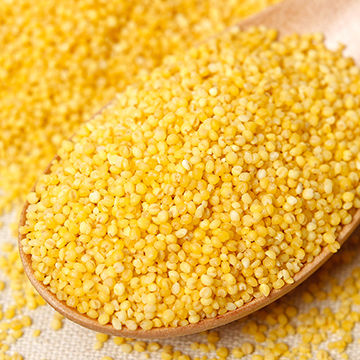 Millet are a group of highly variable small - seeded grasses, widely grown around the world as cereal crops or grains for fodder and human food.

Millet are important crops in the semiarid tropics of Asia and Africa (especially in India, Mali, Nigeria, and Niger), with 97% of millet production in developing countries. The crop is favored due to its productivity and short growing season under dry, high - temperature conditions.

Millet are indigenous to many parts of the world. The most widely grown millet is Pearl Millet, which is an important crop in India and parts of Africa. Finger millet, Proso millet, and Foxtail Millet are also important crop species.

Millet may have been consumed by humans for some 7, 000 years, and potentially had "a pivotal role in the rise of multi - crop agriculture and settled farming societies".

We recommend to see
Millet
To Compare the Products
×